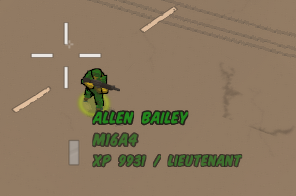 Similar to most RPG, you gain experience while killing enemies. The higher the rank of the enemy, the more XP you gain.

Performing kill combos will also give you an XP boost. Stabbing an enemy gives the most XP, as the XP multiplier is around 250%.

To view your XP/rank, hover over your character. The number at the bottom shows your experience points (XP) and it starts from 0 at the beginning. On the right side is shown your current rank. You gain XP by killing enemies (the XP gain pops up over an enemies dead body). You also lose some XP by getting killed/committing suicide or team killing. You can also check your rank by keeping the F key (by default) pressed and right beyond your soldier your XP and RP is shown.

Your rank will dictate a few things:

The XP requirements for each rank can be referred in the table below:

Score is a statistic for online play. It is a simple Kills – Deaths calculation and gives you a general idea of performance. If a server has Persistent Statistics, then your score along with the other stats shown by pressing the F1-key (default) will be saved over multiple matches and logins. None of these statistics have any influence on gameplay.