For most maps, the ultimate objective of RWR is to capture the entire map. This is done by capturing the sectors shown in the map. The sectors shaded by your faction's color belong to you already.

On King of the Hill type maps (Power Junction and Vigil Island), the objective is to capture the central base (which is a neutral zone at the beginning of the match) and hold it non-stop for the required amount of time. If the enemy faction take the "hill" back, the countdown timer will be reset.

Capturing sectors is achieved by having more than 66% of the total troop count in the capture zone as denoted by a dashed square on the map for each sector (see image "capture zone example" below). As a sector is being captured, a timer will count down from 10 to 0 with an audible beeping sound. However, the last sector of the map will take 30 seconds to capture rather than the standard 10. If the countdown timer is interrupted (you suddenly have less than 66% of the total troop count), the timer will stop and restart next time you get more than 66% again.

The 66% mark are denoted by a vertical stroke (see image "capture force example"). If the black square is outside those vertical stroke, then it means that there are more than 66% of the forces of a faction inside the capture zone. In the specific example below, we have around 80% of the troups being the Graycollars, so that the timer is ticking down (6 seconds left to go before the base is captured by the attacking faction) 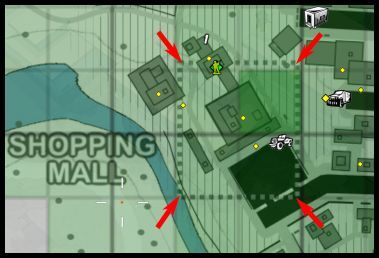 Capturing bases can be tough. There are a few, optional missions you can attempt on the side to help even the odds...

Be the eyes of your faction, perched up on rooftops or hidden deep in enemy territory. Spot vehicles and structures that will appear on the map for your whole team. Also gives a certain amount of RP.

These targets of opportunity provide strategic abilities to the owning faction, and gives a certain XP and RP awards when destroyed:

Targets that will grant a one-time influx of 20 prisoners of your faction as a extra units upon their destruction:

The unlocked weapons ends of stock after 4 hours. To re-unlock them you must repeat the same procedure.

1) Persistent profiles: when you leave the match, you'll still have the equipment/XP/RP/stats you had when you join again
2) FoV is enabled on default which means you won't see the enemies/items/vehicles when your soldier doesn't have a direct visual line of sight to them 3) Overall/Match stats (on the scoreboard (default F1), you can switch between them by pressing the top banner)
4) No death penalty (No XP lost)
5) Lower equipment requirement for most items
6) Max amount of AI soldiers under your control is 4 (instead of 10 in other modes)
7) No elites, no valuables drops and no rare weapons
8) Killing a bot gives you 2XP+1RP, killing a human 20XP+20RP, capturing a base up to 50RP. Spotting and destroying of vehicles give less reward than in invasion
9) Max time a map lasts is 30 minutes. If noone won after the time ran out, the faction with the most bases will be victorious
10) extended single base capture system where sometimes you have more than one base that can be captured at time, the main objective which is the bigger red marker and optional smaller red markers. The AI commander will only target the main objective but players are free to choose which base to capture
11) Some maps have bases left out to keep the fighting territory smaller

The winner of the round is the faction who delivered the most teddies. This mode in online can only be hosted as a dedicated server.