The mapview can be called by pressing the TAB key (default value). It gives you important informations about what territory is under your control and what base your commander AI is targeting. It also shows the different accessible spawn, vehicles and resources locations. It also shows the base names and those base are painted in the color of the faction which is under their control.

On the right hand side you have the name of the map (in this case Moorland Trenches) and on top of it a mini map of the worldview, which contains all maps for the campaign and a network which connected them together as you can't move from one map to another if those aren't linked together in the network. With WheelUP, WheelDOWN of your mouse, you can zoom in and out. With the Left Mouse Button keep pressed you can also pan through the mapview (if zoomed in).

Since version 0.96 the soldier repartition is represented by colored clouds. The darker those clouds the more soldiers are on the same location. Enemy clouds can only be seen in sectors in contact with your own one. Squads of your own faction can be seen over the whole map (the picture below is still from the old system where you saw small numbers in each populated square of the grid). 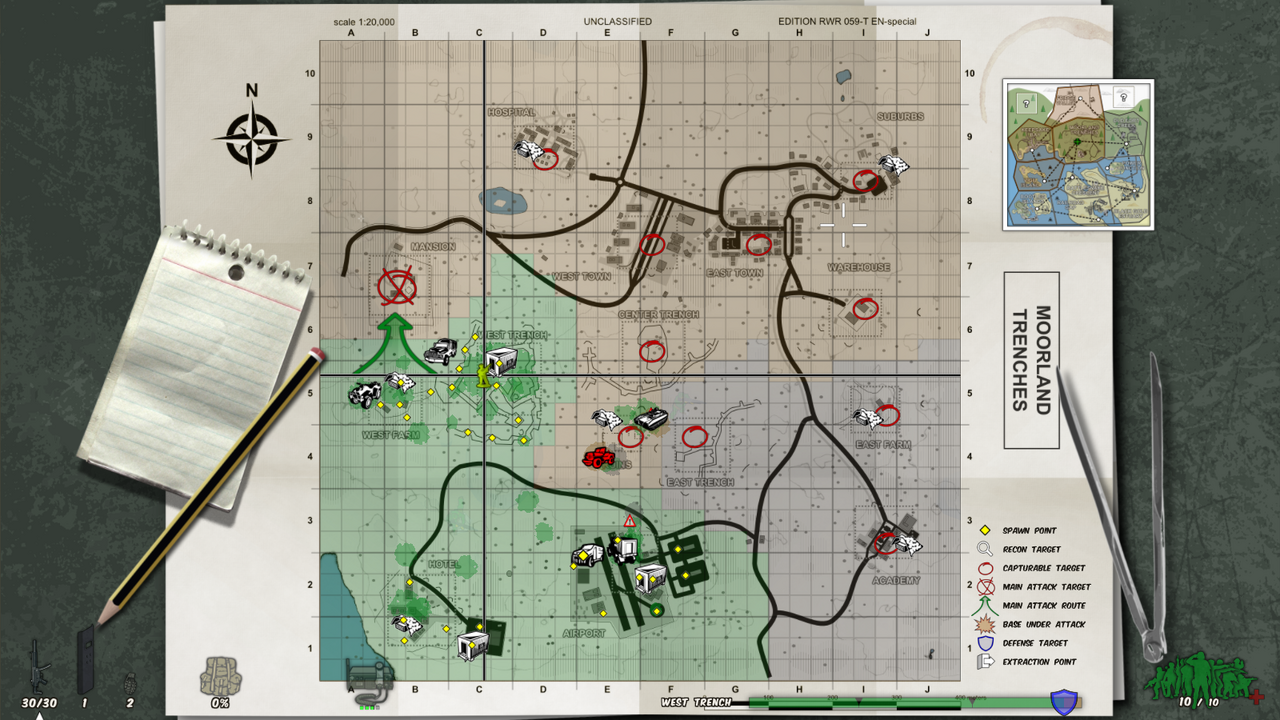 Vehicles are shown in red color when those are enemy vehicles that has been spotted. If not spotted, an hostile vehicle will be invisible on the map. After a while a spotted enemy vehicle will become invisible again until it is spotted again. Allies Armored Truck has a spawnpoint attached to the vehicle. So does the Patrol ship and the Flare. If either of those are not near enemy units, you can use them as spawn location by clicking the vehicle. The Armory Truck is similar to the static armory, just mobile and destructible.

Radars are present on some maps and are side mission objectives. They are usually well defended so it's hard to sabotage them, especially the Radar Tower but gives along with a nice RP reward, also a communication slow-down of the enemy, i.e. the mapview markers of the enemy team will become invisible and the commander AI won't start organized assaults anymore until the radar respawns (usually 300 seconds). Also it jams radio communication so that you won't be able to use radio calls in a large perimeter around a radar tower/truck. There is also a radio jamming tower ingame, which is similar to the radar tower but with the difference that it won't affect the commander AI slowdown.


The stash is always visible on the map, even if it's in hostile territory.
The armory is only visible in your own territory but you can use enemy armories as well. They will only sell you resources that available for your faction

Note: The GL deploy marker is the same as the MG marker.


Anti-Air Emplacements prevent air-dropped support calls in the area. Destruction gives an instant XP and RP reward to a single player.
Prison Doors, Prison Hatches and Prison Buses will grant a one-time influx of veteran soldiers upon their destruction.